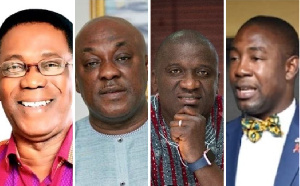 It has emerged that some appointees of the Nana Addo Dankwa Akufo-Addo government never declared their assets as required by law.

GhanaWeb sighted a report by Accra-based online portal – The Fourth Estate – indicating that 19 of the minister’s President Akufo-Addo swore into office during his first term violated the law.

According to the report, President Akufo-Addo had complied fully with the asset declaration law since coming into office as president in January 2017. He has declared his assets three times since 2017.

The report further sighted President Akufo-Addo stating on July 18, 2017, that all his appointees had declared their assets.

The 19 appointees who failed to declare their assets include:

3. Tangoba Abayege – She succeeded Rockson Bukari as the Upper East Regional Minister after Bukari resigned and was moved to the presidency as minister of state in 2018.

She is now the Mayor of the Accra Metropolitan Assembly.

What does the Asset Declaration law say?

By law, ministers are to declare their assets within six months in office and latest six months after the end of a government’s first term.

Article 268 (1) of the 1992 Constitution states that “a person who holds a public office mentioned in clause (5) of this Article shall submit to the Auditor-General a written declaration of all property or assets owned by or liabilities owed by, him whether directly or indirectly (a) within three months after the coming into force of this Constitution or before taking office, as the case may be, (b) at the end of every four years; and (b) at the end of his term of office.”

The Constitution requires the declaration to be done before the public officer takes office. However, Section 1(4)(c) of the Public Office Holders (Declaration of Assets and Disqualification) Act directs public office holders to meet this requirement not later than six months after taking office, at the end of every four years and not later than six months at the end of his or her term.

The law requires that the President, Vice-President, the Speaker, Deputy Speakers of Parliament, ministers and deputy ministers of state, ambassadors, the Chief Justice and managers of public institutions in which the state has interest submit to the Auditor-General written declarations of all property or assets owned by, or liabilities owed by them, whether directly or indirectly.

They are required to declare their assets relating to:

(d) trust or family property in respect of which the officer has beneficial interest;

(j) life and other insurance policies;

(k) such other properties as are specified on the declaration form.