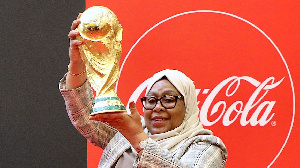 The coveted Fifa World Cup trophy has arrived in Tanzania for the much-awaited, two-day tour. The trophy is on a world tour ahead of the World Cup in Qatar in November and December.

The President said the unveiling of the FIFA World Cup trophy in the country was a great motivation for economic growth urging Tanzanians to use the opportunity for national benefits.

“I urge Tanzanians to use the opportunity not only to say good things about their country but also to sell products made in Tanzania,” the head of the state said before the 18-carat gold trophy was unveiled.

With only a sitting president or a member of a World Cup-winning squad allowed to hold the trophy, it was kept in a glass casing with government officials and former Tanzania National (Taifa Stars) former players led by Sunday Manara and Abdallah Kibadeni allowed to pose for a photo beside it at the State House.

The trophy is accompanied in the country by Brazilian footballer Juliano Belletti.

Belletti, 45, is a World Cup-winning defender who is remembered for scoring Barcelona’s winning goal at the 2006 Uefa Champions League final.

With Tanzania being among nine African countries that will host the World Cup Trophy on this trip, the public will have the opportunity to view the 18-carat golden trophy at the Benjamin Mkapa Stadium on Wednesday, June 1.