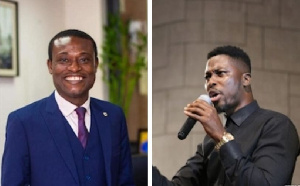 A Plus is mocking the Special Prosecutor

The SP had stated that, he needs resources to fight corruption

A similar statement made by Martin Amidu

Kwame Asare Obeng, a.k.a. A Plus, has reacted to comments by the Special Prosecutor (SP), Kissi Agyebeng that the corruption fight in Ghana will be an illusion without resources.

The SP had called on the government to make resources available to his office to enable it to deliver on its mandate.

He said, without the material resources available, the good intention to fight graft will be an illusion.

“I look forward to the provision of adequate funding and the necessary materials resources as stipulated in Article 6 and 36 of the UN Convention in carrying this challenging and solemn mandate. “I cannot help but state without adequate funding and the provision of the necessary material resources, the good intentions of my staff would remain just good intentions, nothing concrete to show for it.

Reacting to this on his verified Facebook timeline, A Plus shared a screenshot of what Kissi Agyebeng said and a similar statement made by Martin Amidu, under his tenure as the Special Prosecutor.

He wrote, “the tree Kwaku Ananse has eaten and died, his son Ntekuma does not sleep under. This is the mother of all proverbs.”

Martin Amidu, on September 27, 2018, stated at the National Audit Forum organized by the Ghana Audit Service, that his office lacks the resources to deliver.

“I am saying this for the public to understand that we have set up an office. We have to organize that office, have the requisite personnel. It does not take one day. The law says 90 days after the assumption of office of the Special Prosecutor, pursuant legislation must be enacted, but as I speak today, I have no legislation so I use my common sense.”

He noted at the time that, his office will not be able to fully discharge its duties if the situation was not addressed by appropriate quarters.

‘My 90-year-old mother has been crying’ – Nhyiaeso MP claims