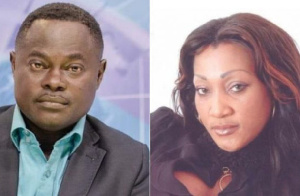 Three lessons everyone must learn from Odartey Lamptey’s divorce saga

There is a saying that “your best teacher in life is your last mistake”. The reality, however, is that we don’t only learn from our own mistakes but from others as well.

Odartey Lamptey and Gloria walked down the aisle under Ghana’s Marriage Ordinance on May 28, 1994. But after 23 years of marriage, the court had to separate the two.

In 2013, Gloria petitioned High Court to annul the marriage for five reasons, which included violent behaviour, infidelity, subjecting her and her children to grave emotional and psychological abuse, having extramarital affairs, and constant false accusations of adultery against her.

Odartey Lamptey agreed but in his defence, accused the wife of infidelity. He proved it with DNA results that showed he is not the father of three children he had fathered.

Eventually, the Court granted the divorce in 2017 bringing a marriage of 23 years to an end.

A court tussle continued as Gloria refused to let go of the 7-bedroom mansion which was part of Odartey’s divorce settlement.

A final ruling on March 2, 2022, handed the apartment to Odartey after nine years of back and forth.

Close relatives of the couple have alleged that Gloria Lamptey was not with Odartey most of the time during his active career.

One of the best ways to build healthy relationships is to keep your partner close most time. It builds trust and you both get to connect more.

Be careful with friends

Reports are that Gloria cheated on Odartey with his close friends. The reported cheating is said to be among the factors that led to the collapse of the marriage.

In as much as friends cannot be prevented from being friends with spouses, preventing them from having intimate relationships appears to be also impossible but the utmost best you can do is to be observant and not overly trust them.

Consider the opinion of parents in your relationship

Odartey Lamptey in an emotional interview with EIB Network journalist, Nana Aba Anamoah, disclosed that his mother was not in support of the two tieing the knot.

However, as young as he was and how deeply he had fallen for Gloria, he went ahead to follow his heart.

Mothers and fathers may not be always right when they oppose who to marry but at the very least, understanding the reason for the opposition will help in the long run.

Tags divorce EVERYONE FROM learn LESSONS MUST Odartey SAGA three

Previous Kofi Adoma regrets treachery, appreciates wife for her composure during ‘turmoil’
Next Watch the late Osinachi’s performance of a Twi worship song