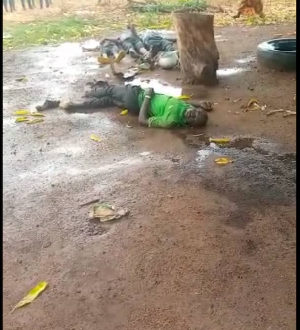 A thunder strike during a brief downpour has claimed the lives of four people in Serepkere, a community in the Nadowli-Kaleo District.

Three are brothers of the same father, while the fourth person is a scrap metal dealer.

Preliminary information gathered by the Ghana News Agency (GNA) indicated that the scrap metal dealer, who had gone to the community to buy some metals from the other victims, attempted to rescue the three brothers and was also caught by the thundershock in the process.

A source, who pleaded anonymity with the GNA explained that thunder victims were not supposed to be touched unless traditional rites were performed.

The source said the scrap dealer unknown to him thought he could save the three brothers but was also killed in the process.

Information available to GNA also indicated that there was the fourth time the incident had happened and affected the same family.

The victims had been buried after performing the necessary traditional rites while the funeral ceremony is ongoing.

Meanwhile, when the GNA contacted Mr. Titus Mambo, the Assembly Member of the Serekpere Electoral Area, who is directly related to the three brothers, he confirmed the incident but could not give further details since he said he was traumatized.