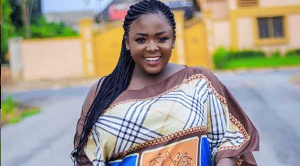 Midway through Tracey Boakye’s interview with Abeiku Santana on the ATUU show, she was unable to confirm or deny whether her sponsor (Papano) is married or not.

Abeiku Santana in the quest to unravel the truth, asked Tracey if she is indeed dating a married man and she ended up fumbling with words.

Abeiku pushed further and asked whether it is right to have a child with a married man and she could not confirm or deny that the man in question was married.

Tracey disclosed that her ‘mystery man’ has four other children asides from their two-year-old daughter.

“Our daughter Nhyira is his fifth born,” she said.

Asked whether she has plans to settle down with the ‘man in question’, Tracey said;

“I might not marry him and I’m sure he won’t take offense to that. Although we like each other, anything can happen. If it’s God’s will, fine. If it’s not, fine.”