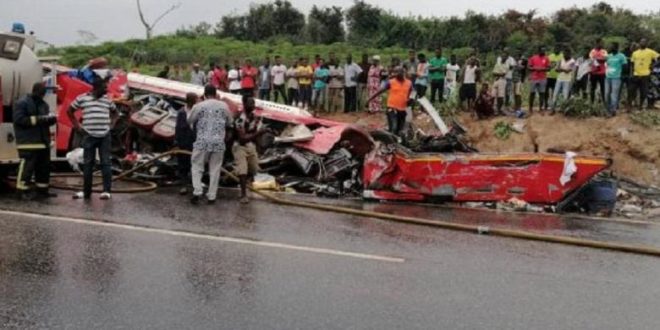 A motor accident has occurred on the Accra-Nsawam Road, GhanaWeb has learnt.

The incident which occurred at around 4:00pm on Saturday involved a truck carting plantain which was heading towards the Kwame Nkrumah Circle.

GhanaWeb’s Daniel Sackitey who was on the scene shortly after the incident occurred was told by eyewitnesses that the truck suddenly veered off the road and crashed into another car nearby a bus stop.

“After the incident occurred, another oncoming car suddenly crashed into the accident and this has created a terrible traffic situation here,” an eyewitness told GhanaWeb.

The Police are however said to be on scene trying to ascertain the situation and control traffic flow following the incident.

No death has so far been recorded.