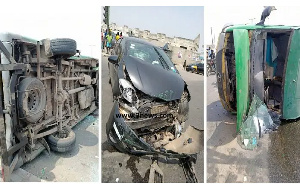 Two dead in accident at Odododiodio

Two people have died, while about six others sustained various degrees of injury in an accident that occurred at the Mudor traffic area in the Greater Accra Region.

The two were part of passengers in a Mercedes Benz bus and a Toyota saloon car that collided at the traffic intersection.

On-lookers blamed Sunday’s accident on the non-functioning of the traffic lights.

The dead were sent to the Korle-Bu Teaching Hospital mortuary while the injured were also sent to the same hospital for treatment.

On reaching the traffic intersection, where the years-old faulty lights are, the two vehicles collided, leaving the two dead and the other six injured.