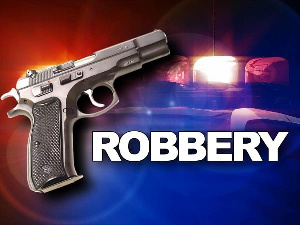 Two Ghanaians have died while three others are in critical condition after armed robbers attacked five tomato importing vehicles at Tambolo near Dakota in Burkina Faso and about half a mile from the Ghana border at Paga.

The five vehicles were on their way from Ghana to Burkina Faso to buy tomatoes when the armed men attacked and shot at them sporadically killing one instantly at about 1900 hours, Saturday, April 16, 2022.

The other passed on shortly after arriving at the War Memorial Hospital in the Kassena-Nankana Municipality of the Upper East Region, where the injured persons are currently receiving medical attention.

Assistant Superintendent of Police, Mr David Fianko-Okyere, Public Relations Officer, Upper East Regional Police Command, who confirmed the accident to the Ghana News Agency, said the injured were responding to treatment, while the bodies of the deceased have also been deposited at the morgue of the hospital for preservation.

ASP Fianko-Okyere who could not give details investigation into the matter was ongoing.

“We still trying to get in contact with authorities in Burkina Faso to know the report that was sent there so that we can get more information,” he said.

According to one of the drivers, Mr Kofi Nti, the armed robbers shot at their vehicles compelling them to halt movement and this led to the robbers driving out all the traders and demanding they surrounded all their monies to them which they did.

But the armed robbers who were heard speaking twi demanded more and subjected all the women traders to severe beatings, severely injuring three, he added.

They also shot through the windscreen and killed one instantly, while the other who died afterwards sustained severe injuries and was bleeding profusely.

The traders said the armed robbers numbering about seven fled on motorbikes after the attack.

Nana Yaa, one of the traders told GNA that her sister was the person who died instantly after the armed robbers shot at them through the windscreen.

She, apart from losing a relative and receiving beatings, also lost CFA 870,000.00

Madam Sophia Nsiah, another trader told GNA that she lost all the CFA 90,000.00 that she was sending to buy her goods to the armed robbers.