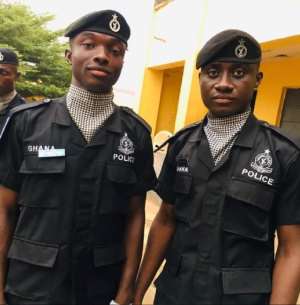 Two Police officers, three male civilians and female passenger on Sunday, January 13 died on the spot in a fatal accident on the Asikuma-Kpeve highway.

On Sunday at about 8:15am Mr Asupah Kwame, 25, driver of a Ford transit bus with registration No. GJ 729-21 with 17 passengers on board travelling from Accra to Kpassa on reaching a section of the road between Asikuma and Peki on the Asikuma -Kpeve highway burst a tyre.

The vehicle veered into the opposite lane and crushed head-on with an APSONIC motor bike with registration No. M-22 VR 4 ridden by General Constable Richard Dadzie with pillon rider G/Cpl. Evans Quansah all of Peki Police Station who were on their way to the Police checkpoint at Opokuase near Asikuma junction.

The vehicle and the motor-bike somersaulted and landed in the offside bush when facing Peki direction.

The two Police officers, three male and one female passenger on board the ford transit bus died on the spot.

The injured passengers on board the vehicle including the driver were rushed to the Peki Government Hospital for medical attention.

Meanwhile, the bodies of the deceased have been deposited at same hospital morgue for identification, preservation and autopsy.