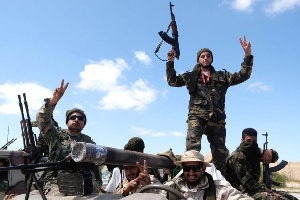 Tensions have mounted in Libya in the past few days, raising doubts that an election, seen as crucial to restoring stability to the conflict-ridden country, will be held as scheduled later this month.

Armed groups overnight took control of the area near the council of ministers’ premises in the capital Tripoli, news portal Libyan Observer reported on Thursday.

The takeover followed tensions after the Presidency Council, part of Libya’s interim administration, sacked the commander of the Tripoli Military Zone.

Earlier this week, clashes erupted in Libya’s southern city of Sabha between forces of the self-styled Libyan National Army (LNA), and loyalists of the Tripoli-based government.

At least one person was killed and two others injured, according to local medical sources.

Sabha is under the control of LNA forces aligned with General Khalifa Haftar, who has filed to run in Libya’s presidential polls scheduled for December 24.

The election is part of a United Nations-backed plan to end a decade of chaos in Libya.

However, Abu Bakr Marada, a member of an electoral commission, Thursday ruled out holding the vote as scheduled.

Marada told the Qatari news television, Al Jazeera, that staging the election on December 24 “is no longer possible”.

Dozens of candidates have applied to run for president in Libya.

They include Saif al-Islam, the son of late Libyan dictator Moammer Gaddafi, wanted by the International Criminal Court on charges of crimes against humanity during a 2011 uprising against his father.

Another controversial contender is Haftar.

Libya has been in turmoil since the 2011 overthrow of Gaddafi, and has become a battleground for rival proxy forces that has drawn in foreign powers.

Source: GNA
Related Topics:libya
Up Next