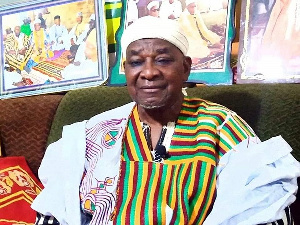 Sheikh Tahir reportedly died on Saturday February 19,2022, at the Regional hospital in Bolgatanga.

Sheikk Tahir, 4 months ago, became the regional chief imam after the passing of Alhaji Adam Yussif, who held the position before his demise on November 4, 2021.

Sheikh Tahir until his demise doubled as the National Chairman for the Tijjaniyya Muslim Council of Ghana.

The circumstances of Sheikk Tahir’s death are still unknown.

The Muslim fraternity in the region since the news of Sheikk Tahir’s death broke, have described it as worrying.

The Islamic clergy in the region has officially announced his death via a statement on Facebook.

Sheikh Tahir while alive was a proponent of peace and unity in the region.

He recently organised his maiden regional conference of Imams and Islamic leaders, an event he used to call for peace in troubled areas within the region such as Bawku, Doba and Kandiga.

Sheikh Tahir also used the occasion to talk about the advancement of the Muslim communities in the region and the greater good of the entire Upper East region.

Hundreds of mourners have since gathered at his residence in Bolgatanga.

The remains of the late Sheikh Saeed Tahir will be interred in accordance with Islamic traditions.

Previous VIDEO: This is why Akufo-Addo flew to Kumasi with Serwaa Broni in the presidential jet
Next Sports Debate: Who wins the GPL Super Clash between Hearts of Oak and Asante Kotoko?