Home / GENERAL NEWS / VIDEO: This is why Akufo-Addo flew to Kumasi with Serwaa Broni in the presidential jet 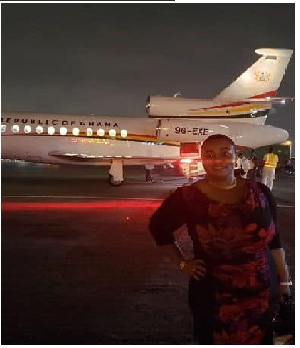 VIDEO: This is why Akufo-Addo flew to Kumasi with Serwaa Broni in the presidential jet

Hopeson Adorye has explained the real circumstances under which Serwaa Broni got on the presidential jet with the president, Nana Addo Dankwa Akufo-Addo.

According to the former Deputy National Security Coordinator in charge of Airports, through his close relations with the president, he got Serwaa Broni introduced to him.

He added that it was through this that she got the chance to be invited on a trip with the president when she got in touch with him later.

Speaking to Kofi Adomaa of Kofi TV, monitored by GhanaWeb, Hopeson Adorye explained that it is laughable that because of that one encounter, the controversial Serwaa Broni would claim to be the girlfriend of the president.

“I am one person who, by the Grace of God, the man likes me. If you are with me and I introduce you to the man, the next time he sees you, you will be surprised by the warmth he will extend to you. When she got into town, she called the president and said she was Hopeson’s friend and that she was in town and wanted to pass by to greet him.

“That was when the president told her that he was on his way to Kumasi so she could come along and is that what makes you his girlfriend?” he quizzed.

The Former Deputy National Security Coordinator in Charge of Airports has disclosed that the Government of Ghana will soon lodge an official complaint against Serwaa Broni in Canada.

Her charge, according to him, will be blackmailing the president of Ghana, Nana Addo Dankwa Akufo-Addo and also spreading false information about the first man of the land.

According to Mr Adorye, there is no sexual relationship between the president and Serwaa Broni, who, he said only got the opportunity to meet the president in Canada through him.

“The picture of that young lady in yellow dress sitting beside the president was taken in Canada. I took that particular picture. That was the first time, the lady met the president face to face.

“She is the one who drives us around when we come to Canada. Did you realize the president was even giving a gab between them? So how can she be a girlfriend? When you sent the picture to Facebook, your mother sent you recorded audio, telling you to inform the president of all your challenges in life. So how come, all of a sudden you have become the girlfriend of the president? Rubbish it, so women are friends with presidents, does it mean, they are in a relationship?” he quizzed.

He claimed that the young lady who is based in Canada has reported herself to the Canada Police for having mental illness.

“I am the one who introduced her to the president. I have so many audios from the lady, she will drink poison to die if I release any of the audios. She should stop those foolish things. Some elders have spoken to me to keep quiet, else if I should dedicate just 30minutes to deal with her, she cannot come out publicly again. Is she getting mad? No wonder she has reported herself to Canada Police that she has mental issues.”

Hopeson Adorye had an explanation as to why Serwaa Broni was spotted in the president’s private jet in one of the viral pictures released.

“She called the president when she came to Ghana, and the president told her, he was travelling to Kumasi so she could join them. Can this show, that you are his girlfriend?”

He told the Kofi Adoma that Serwaa Broni will soon find herself answering some questions by the Canadian Police for ‘blackmailing’ President Akufo-Addo.

“What she is doing is blackmail. In Canadian law, it is a serious crime. Is she not blackmailing the president? To come out and say that, you will release a naked video of the president on his birthday, if you are not mad, will you do that?”

The former New Patriotic Party (NPP) Parliamentary Candidate for the Kpone-Katamanso Constituency, reiterated that the arrest will soon be effected.

“She will be arrested in Canada, read my lips. We will lodge an official complaint in US through the Ghana Embassy. They have to come out to prove if indeed those pictures of penis belongs to the president…I am assuring you, we won’t sit down for the President of the Republic of Ghana to be blackmailed.”