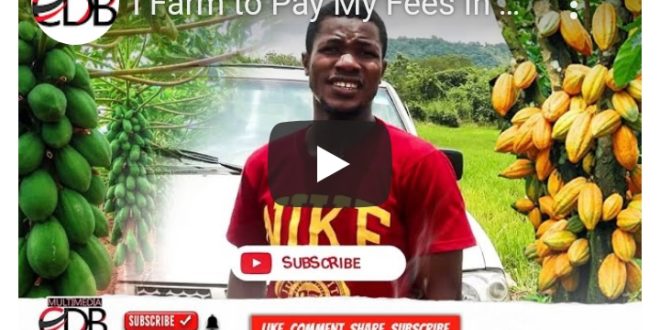 VIDEO: Meet the 23-year-old student who farms to pay his university fees

From picking inspiration from his own father, 23-year-old Perry Appoh is currently seeing himself through university education from farming.

The Geography student of the University of Ghana who hails from Ziave in the Volta Region, says he acquired the skill and love for farming from the age of 15 when he and his siblings started following their father to the farm.

According to Perry, his father Mr Francis Appoh who was the 2017 District Best Farmer for their area inspired him in many ways including his ability to cater for his family of 8 by depending on farming alone.

Through the inspiration drawn from his father, Perry is now a large-scale farmer who is able to pay for his university education without depending on his parents.

He has a couple of farmlands where he cultivates various crops including yam, rice, and lettuce among others.

Perry believes that his usual bumper harvest which results in positive feedback from his customers is a result of his strict use of organic manure as fertiliser for his farm.

Beyond the cultivation of crops, Perry in an interview with MultiCBD further disclosed that he rears mudfish, and tilapia among others for domestic and commercial purposes.

Urging his fellow youth to develop an interest in farming, Perry noted that “farming is either you win or lose but the profit is more than the loss.”