Home / SPORTS / VIDEO: Odartey Lamptey weeps as he talks about his new wife on live TV 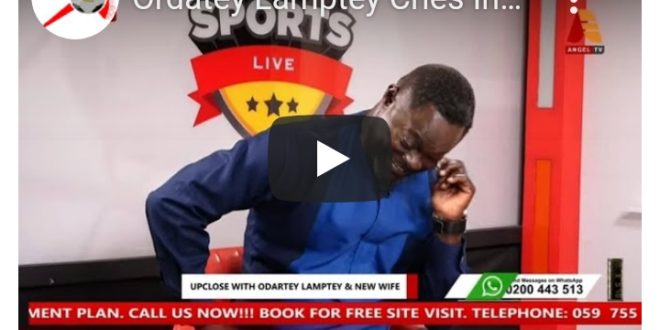 VIDEO: Odartey Lamptey weeps as he talks about his new wife on live TV

The 1991 U-17 FIFA World Cup winner who suffered infidelity in his past marriage with Gloria, burst into tears when asked about the support Ruweida gave him in the most difficult time of his life.

Nii Odartey Lamptey stated that it would have been more difficult to deal with the trauma, had it not been the unflinching support from Ruweida and her family.

Odartey Lamptey and Ruweida were both present on Angel TV’s morning sports show with Saddick Adams to share their journey and also talk about their new tennis project.

“Well, I don’t know the words I’m going to use to describe Ruweida and her entire family because I’m sure it would have been more difficult for me to go through what I went through without them but I’m most grateful to have someone like her,” Odartey said while shedding tears.

Odartey Lamptey ended his first marriage with Gloria Appiah after discovering that all three kids he has been fathering for close to two decades are not his real children following a DNA test results.

The woman claims the former Anderlecht and Aston Villa player was the one who suggested artificial insemination after realizing he was infertile.

The issue went to court and after nine years of litigation even after the divorce, the case was closed with Odartey Lamptey getting a chunk of his properties back.

Watch the video below from the 28th minute