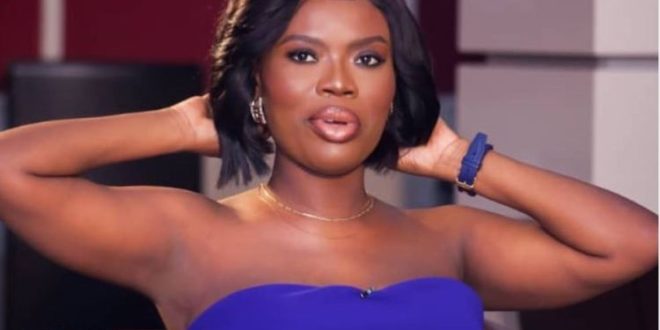 Television personality, Deloris Frimpong Manso has taken a dig at an unidentified woman while crowning herself as the topmost presenter in Ghana.

Typical of her introduction to her weekly interviews, the presenter, clad in red with her legs crossed, placed herself above colleagues, including her contemporaries.

“None can be compared to me; whether the old or the new generation. I am second to none. My fans on various social media platforms are solidly behind me,” Delay, as the presenter is affectionately called, said in Twi as she rhymed on The Delay Show.

Resorting to simile, Delay likened the intelligence of an unknown female personality to diminutive socialite Shatta Bandle’s shoes as she sought to establish how shallow the said individual is.

“Madam hater, based on your actions, I consider your brainpower to be as small as the shoes of Shatta Bandle,” she jabbed.

Delay is regarded as a fine interviewer due to her countenance and line of question during interviews. She has been on TV for the past fourteen (14) years and established herself as a formidable brand.

In 1999, Delay started her broadcasting career with Life FM in Nkawkaw in the Eastern Region. She joined Top Radio, Accra, in 2005 as a midmorning show host until 2007. Between 2007 and 2016, she worked with Oman FM. While at Oman FM in 2008, Delay started her television show ‘The Delay Show’ which has been vibrant to date.

After going off radio for a while and focusing on The Delay Show, Delay is back on air as host of Accra-based Wontumi Radio’s drivetime show.