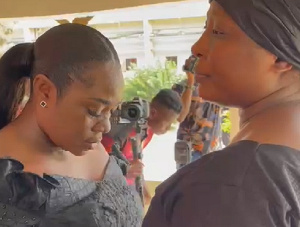 Popular Kumawood actress, Emelia Brobbey, could not hold back her tears after seeing her friend, Gloria Sarfo, who has obviously been drowned over her late mother’s passing.

Emelia who was one of the few celebrities to grace Gloria’s late mother’s one-week observation was captured consoling and whispering some words of comfort to her.

The two hugged tightly and all of a sudden tears began to roll down Emelia Brobbey’s cheeks and Gloria was compelled to also weep.

The modest ceremony which was held in Dome, Accra, was witnessed by family members, friends, and sympathizers all-alike.

However, the final funeral rites for Mrs. Ophelia Yeboah will be held at Osiem in the Eastern region from April 26-28th.