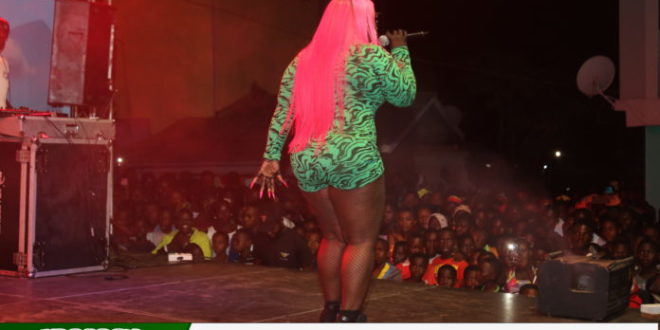 The only A-list female rapper billed to perform at Adom Mega Street Bash was Eno Barony and she nailed it.

Clad in her brightly-coloured pink wig with a body-fit green attire, the rap goddess was more than poised to deliver.

Taking over the spot after Kuami Eugene’s showdown meant Eno Barony had to keep the crowd in the charged-up state till the show climaxed.

Meanwhile, Eno took little to no effort to electrify the huge crowd with her rap prowess.

With her favourite line ‘Won ti asie a deadi’ to wit ‘if you don’t understand, die’, Eno Barony thanked God for being the only female rapper to be a rap maestro in Ghana.

The crowd moved along with her rap lyrics as she performs in front of the Mpraeso Palace at Kwawu.

Previous Kwahu Easter festivities: the euphoria is back again
Next Lack of enough generation capacity cause of current ‘Dumsor’ – IES