Home / CRIME & PUNISHMENT / VIDEO: Fake soldier shouts for his mother as he is busted for recruitment scam 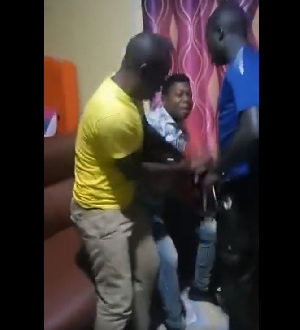 VIDEO: Fake soldier shouts for his mother as he is busted for recruitment scam

A young man has been arrested for posing as a military officer.

The arrest of the yet-to-be identified man was captured in a viral video which has been sighted by GhanaWeb.

The video captures a living room with about five persons seated. Some men suspected to be military officers identified themselves with one giving his name as WO2 Adu Boateng and another also showing a Ghana Armed Forces ID Card bearing the name Kusi Bright.

They go-ahead ahead to interrogate the young man who was seated facing them and looking visibly shaken.

Also seated by the young man was a woman who is suspected to have fallen victim to his recruitment scam.

“You told her you are a soldier and asked her to bring money so you recruit her into the military. What is your rank?” one of the soldiers who was in plain clothing questioned.

With the suspect fumbling to give a reasonable answer, the senior officer ordered his men to handcuff the young man who was immediately triggered into a pleading mode.

“My brother is the MP for Ejisu and my mom is around let us call her and settle this,” he pleaded further.

“You are mad, going about proposing marriage to women because you know the women are struggling,” one of the military officers is heard saying.

The suspect then reaches for his mobile phone to call his mother but had the phone is taken away from him. The team of officers go on to show the screensaver on phone which has him in a military uniform as the wallpaper.

“Where did you get the uniform?” the officers shouted in sync.

While fumbling, the suspect blurts saying “I was part of the group which went for training in 2015 and were sacked.”

The unrelenting officers move ahead to drag him out of the room by his waist while the suspect’s incessant calls for his mother continued.

Previous LIVESTREAMING: Parliament decides fate of Adwoa Safo
Next I paid N6M for a flight to Dubai just to take pictures for my birthday – Bobrisky brags