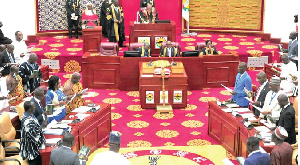 Parliament is sitting for the last time for the second session of the eighth parliament.

The sitting is expected to, among other things, decide the fate of the Member of Parliament for Dome Kwabenya, Sarah Adwoa Safo.

The decision of the House is to determine whether or not she should be ejected for extended absence without appropriate permission.

Parliament’s Privileges Committee, tasked with investigating extended absences by the MP and two others from the Majority, will present its report to the plenary later today.

Earlier reports said members of the Committee are split down the middle over the decision on Adwoa Safo’s status as a lawmaker.

Whereas the Majority bloc has recommended that the Dome-Kwabenya seat be declared vacant, the Minority is of the view that the absentee MP should be offered more time to respond to what reasons have kept her away from the lawmaking chamber since December 2021.

Watch the livestream below:

Previous 25,800 newborn babies die within 3 years in Ghana
Next VIDEO: Fake soldier shouts for his mother as he is busted for recruitment scam