Home / GENERAL NEWS / VIDEO: How a fight between two ‘gangsters’ resulted in a bloodbath on the streets of Nima 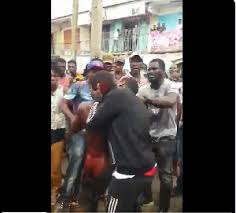 VIDEO: How a fight between two ‘gangsters’ resulted in a bloodbath on the streets of Nima

Two rival groups face-off on the streets of Nima

The Ghana Police Service have provided details on the violence that erupted on the streets of Nima and its environs in Accra on Tuesday, January 18, 2022.

The incident that had machete-wielding young men take over the streets in a battle that saw the firing of several gunshots, took the timely intervention of the police to avert an escalation of the already bloody situation.

Speaking at a press conference later in the evening, the Director of Public Affairs for the Police Service, ACP Kwesi Ofori, connected the genesis of the bloody conflict to a longstanding contention between two known gangsters in the neighbourhood.

“It is led by one Kumordzi alias Ibrahim Hussein and Baboon alias Awudu; they are rivalry groups that never agreed on issues and today they went all-out on the open streets of Nima,” ACP Kwesi Ofori describing the incident as gangsterism and mass violence stated.

He disclosed that seven persons have been arrested in connection with the violence with police in pursuit of other suspects.

“The intervention force (police) had to manage the situation carefully. They’ve managed to stabilize the situation. Seven people have been arrested; five are currently present here with us, and the other two are on admission under police guard. That suggests that they are under arrest. Again, we are pursuing the criminals in and around Nima and its environs to make sure that we get them arrested to enable them to face justice,” he said.

It was, however, not disclosed if the two were part of the arrested suspects.

The Director of Public Affairs of the Ghana Police Service emphasized that the police will go all-out to fight crime and assured the residents of Nima and its environs of their commitment to protecting lives and properties.

Videos of the events of Tuesday afternoon started spreading on social media following the outbreak of violence. The police service, in an immediate announcement via its social media pages, stated that it had been able to bring the situation under control.

From several of the videos shared on social media, some of the youth wielding machetes and other weapons could be seen chasing after their rivals and hacking some in the process.

There are gunshots in the video with screams and shouts of panic by residents running to seek safety.

Speaking at the press conference, ACP Kwesi Ofori informed the media that a victim identified as Appiah, who was shot during the incident, is responding to treatment at the 37 Military Hospitals.

He assured of further updates from the police administration on the incident and the ensuing investigation to bring the perpetrators to book.