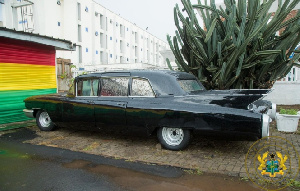 In 1966, Osagyefo Dr. Kwame Nkrumah was ousted from government in a coup d’etat.

When this happened, Nkrumah was out of the country in China, where he had gone on a mission initiated by Ghana’s fellow Commonwealth nations to end the war in Vietnam.

Following this coup, his presidential car; a bullet-proof Cadillac Limousine was found in Togo before eventually conveyed to Ghana – Nkawkaw.

The vehicle was found with several bullet marks on the windshield and all other windows of the vehicle.

Education Officer at the National Museum, Samuel Amegah Jnr. revealed on GhanaWeb’s People & Places show that the vehicle was found at Nkawkaw in October 2001 by a former staff driver; Johnny Botchway, who had served at the Flagstaff House in 1957.
He had notified the National Commission on Culture (NCC) about the location of the vehicle.

“This was then brought to the attention of Ghana Museums and Monuments Board (GMMB). In December 2001, the car was retrieved from the bush (present-day Nkawkaw lorry park) to the premises of the National Museum, Accra,” he told Wonder Hagan.

Though it is still not established how the vehicle got to both Togo and Nkawkaw, curators at Ghana’s National Museum in Accra told GhanaWeb that the car was one of others used by Osagyefo Dr. Kwame Nkrumah during his reign as Head of State.

The vehicle which now sits in the car park of the National Museum is one of other monumental vehicles used by Heads of State of Ghana.

The 1966 coup followed attempts by Nkrumah to force the then military’s most senior officers into retirement.

It was this action more than any other, according to Major A. A. Afrifa, that led to the military-police coup that overthrew Nkrumah on February 24, 1966.

Dr. Nkrumah following this had to seek refuge in Guinea where his friend, President Sekou Toure offered him refuge and made him the honorary co-president of Guinea.

He spent the years after in Guinea, writing among other things until he fell sick and was flown to a clinic in Bucharest where he died of cancer on April 27, 1972.