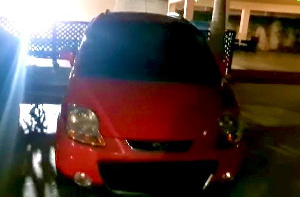 The founder and president of the Worldwide Miracle Outreach, Dr Lawrence Tetteh has fulfilled his promise to Kwasi Ackon, the taxi driver who returned a lost amount to its owner.

Kwasi Ackon recently became a public sensation after a video of his act of honesty went viral on social media. Now tagged as the honest taxi driver, he returned an amount of GHC8,400 left in his taxi by a trader who patronized his service.

His act has since seen him earn several appreciations from the public including Vice President Mahamudu Bawumia who donated an amount of GHC20,000 to Ackon.

Dr Lawrence Tetteh on his part pledged to assist Ackon to acquire a car of his own and has since gone ahead to fulfilling his promise.

Presenting a car to Ackon, Dr Lawrence lauded his honesty as emulating.

The taxi driver on his part expressed appreciation for the gesture of a Daewoo Matiz car gifted to him by the revered man of God.