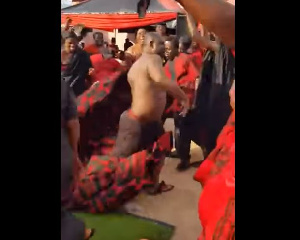 An NPP sympathiser has set the internet blazing after a video of him dancing wildly went viral on social media.

The unidentified man in a video sighted by GhanaWeb is seen touting the achievements of President Nana Addo Dankwa Akufo-Addo at a funeral ground.

In an ecstatic mood, he also sought to sell Vice President Mahamudu Bawumia as the rightful predecessor of President Akufo-Addo.

“President Akufo-Addo is the one who has come and everyone is feeling relieved. King in waiting, Dr Bawumia is also on his way coming. He has asked me to extend his greetings to you all and the people of Ghana.

“We are here to tell former President John Dramani Mahama that he has come and his time is past, he will never come back to power,” he stated amidst cheers from the entire mourners who were gathered at the grounds.

While in his elements, the DJ at the funeral dropped Daddy Lumba’s 2020 remix of his iconic NPP campaign song.

Hearing the song come on, the NPP sympathizer could not help but do away with his funeral clothe and danced to the cheers of the mourners who mobbed him in the process.

Meanwhile, some social media users are claiming he is a DCE but we cannot verify this.