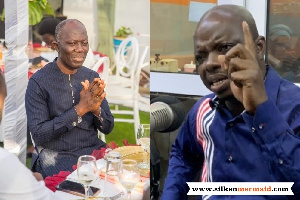 The Bono Regional Chairman of the New Patriotic Party, Kwame Baffoe, alias Abronye, has provided an explanation to his allegations of a personal vendetta harboured against him by the current Inspector General of Police, Dr George Akuffo Dampare.

Abronye who is facing criminal charges of publication of false news and offensive conduct was arrested by the police on February 15, 2022, after he had reported himself to the Accra Regional Command on the invitation of the police.

According to the police, it decided to arrest Abronye and arraign him for court the next day after he failed to substantiate allegations of a coup plot, he made against former President John Dramani Mahama.

But speaking to the media following his release on a bail granted by an Accra Circuit Court on Thursday, Abronye insisted that his detention by the police was on the instigation of the IGP who harbours a personal vendetta against him.

In a later interview on Asempa FM’s Ekosii Sen monitored by GhanaWeb, the Regional Party Chairman threw more light on his allegations against the police chief.

According to Abronye, the IGP through a brother of the Member of Parliament for Assin Central, Kennedy Ohene Agyapong, sought to gain his support in 2019 when the position of IGP became available.

“I was there when Raf called me, I am very close with him all these years. He called me that we needed to talk, so I went to his home at Haatso one Sunday and the current IGP who had then not attained the position was sitting there. His case was that the position of IGP had been vacant and there is a rush for the post. That he knew I had a kinsman who will be competing with him but knows my kinsman will not be able to execute the work of an IGP, he was referring to Oppong Boanuh (Retired IGP, 2019-2021).

“He felt he could do the work better and knowing me as someone coming from the same region as Oppong-Boanuh, he wanted to fall on me to help his chances so that he will also help me when he becomes the IGP,” Abronye stated on Ekosii Sen monitored by GhanaWeb.

According to Abronye, he declined to support Dr George Akuffo Dampare to be the IGP in 2019 on the basis that Dr Dampare was incompetent per his evaluation.

“I asked him a question that when J. B Dankwa was murdered and he arrested Sexy Dondon, he organized a press conference and stated during the press conference that Sexy Dondon and the other suspects had mentioned the names of some highly placed officials who were involved in the murder of J. B. Dankwa,” Abronye said.

He added that “he (Dr Dampare) claimed he knew those highly placed officials but has failed to mention their names up to date.”

Abronye stated that he established on the basis of Dr Dampare’s failure to name the supposed officials that he was incompetent for the position of Inspector General.

According to the Regional Chairman, the IGP since his encounter with him in 2019 picked a grudge against him and has since openly shown disdain towards him.

“Ask whether after that incident the IGP has ever responded to my greetings when I meet him? Even recently that he became IGP, I went to the police headquarters and met him, when I greeted him, he took his eyes away. He didn’t respond.”

Abronye went on to add that “because I said he was incompetent owing to his failure to name the persons involved in the J. B. Dankwa death.”

Standing by his allegation against former President Mahama, Abronye argued that the IGP was bent on overstretching the matter to settle personal scores.

He had earlier insisted during the interview that the IGP specifically ordered his detention on Tuesday.