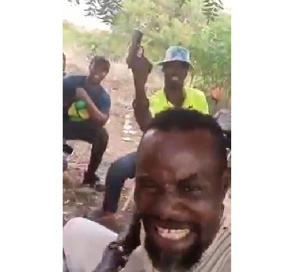 Some group of young men were in a video discharging firearms

They are believed to be landguards

GhanaWeb has intercepted a video of some men alleged to be landguards, seated around a table and discharging firearms indiscriminately.

They are believed to be part of the UN landguard group that according to sources operate in Dawhenya, Sowutuom, Prampram and James Town.

In a report by ghanavoiceonline, the group’s modus operandi involves intimidating landowners in the communities that they ply their trade as well as engaging in other violent crimes.

In the said video, one of the men raises a pistol, is heard saying: “last man standing” and he starts firing warning shots.

Another of the group who was holding the camera asked rhetorically whether those viewing the video can see the guy and hear the gunshots.

“You dey see, we dey eat am, we dey chop am, we dey sleep with am, you dey hear sound…

“Listen to another sound,” another voice said then he fires two shots into the sky.

Section 209 of the Criminal Offences Act, 1960 (Act 29), barres a person from discharging a firearm in public without lawful and necessary occasion.

Recently, the police arrested musician Medikal, because he posted a video of himself holding a Ruger 9mm handgun on Snapchat, a popular social media platform.

Also, one Flt. Sergeant Nicholas Owusu Frimpong was arrested by the police in connection with the discharge of a firearm at A&C Mall, East Legon, on Friday, December 31, 2021.

The suspect was arrested courtesy of a collaboration between the Police and the Military Police. This followed a Police investigation into a viral video that showed a man firing several shots of a firearm at the A&C Mall in Accra.

GhanaWeb cannot independently verify the date the video was taken.