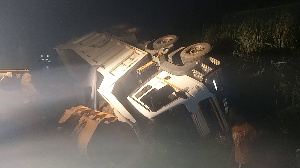 VIDEO: One killed as tipper truck somersaults at Asitey mountains

A driver’s mate has died with the driver seriously injured after they were involved in an accident on the Asitey mountains on the Odumase-Oterkporlu road in the Eastern Region.

The accident occurred Monday, July 18, 2022, at 8 pm when a 12-wheeler man diesel truck with registration number GC-4607-21 reportedly failed its brakes and somersaulted into the adjoining valley, landing on its side.

Though the driver, Mohammed Awudu managed to escape with some injuries, his mechanic, Kofi Emmanuel Dompreh who was in the vehicle with him, was not so lucky as the truck landed on the upper part of his body including the head, killing him on the spot.

Information gathered by GhanaWeb indicates that the truck was transporting limestone from nearby Odugblase heading towards Odumase and to Tema.

But upon reaching a section of the road towards Asitey, the truck reportedly failed its brakes, causing the driver to lose control and ran into the ditch before landing on the passenger side of the vehicle.

However, the deceased was trapped for more than three hours underneath the truck as efforts to lift the vehicle to pull him out lasted.

Yilo Municipal Fire Service Commander, DOII Ebenezer Kofi Djabatey told GhanaWeb that following the receipt of the information, the service mobilized to the scene but efforts to lift the truck were very difficult.

“I had a call from the control room of the Ghana National Fire Service Somanya branch that there’s an accident…we came to the scene, we tried all our efforts but we realised that our car could not pull,” said the fire commander.

Though he couldn’t immediately confirm what caused the accident, he cited the several curves in the enclave as the probable cause and expressed regret at the continuous accidents recorded in the area.

“This is not the first time, we have been receiving several reports of accidents here and the deaths reported are overwhelming and so in fact, it is an accident zone, right up from where the police checkpoint is located to the last curve before the Odumase Konor’s palace is an accident zone and the hill is very tedious,” he said while advising drivers who ply that road to do so with caution.

It took the deployment of a heavy-duty tipper truck from a nearby construction site to the accident scene to lift the vehicle from the deceased.

The body of the victim has been deposited at the Atua Government Hospital, while the injured driver is undergoing treatment at the St. Martin De Pores Hospital at Agomanya.

The hilly Ayemersu-Asitey enclave ridden with heavy-duty limestone-winning trucks is a notorious accident hotspot that has claimed several lives over the years.

Tags AS Asitey at killed mountains ONE somersaults TIPPER TRUCK