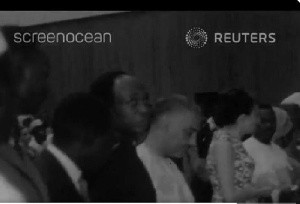 In February 1966, Ghana experienced its first taste of a military takeover when the country’s first president, Osagyefo Dr. Kwame Nkrumah, was kicked out while he was on an international assignment in Hanoi, Vietnam.

The man touted for gaining independence for the country, was on a peacemaking trip over the Vietnam War, leaving a 3-person presidential commission in charge of the country. But not even that national assignment could save him from the anger of the people.

The coup d’état, launched by the National Liberation Council with the code name “Operation Cold Chop,” brought the country to a standstill.

Ahead of the coup, Nkrumah’s popularity had declined substantially, especially in mid-1961 when he instituted a wage freeze, tax increases, and a compulsory savings system to halt a serious drain on foreign exchange reserves without reducing development and prestige expenditures.

“That September, rail and dock workers, and some civil servants struck in protest, a demonstration unprecedented since the country’s independence. Some strikers demanded release of political prisoners and the holding of new elections, as well as satisfaction of their economic grievances.14 A week-long strike action was embarked upon by Ghanaian workers in the three main towns of Accra, Kumasi and Takoradi in protest against the government’s compulsory saving scheme and reflected the growing discontent of the Ghanaian public.

“Numerous assassination attempts traceable to outside intervention dotted Nkrumah’s years in power. In one instance, by unintentionally arriving a few minutes late for a dedication ceremony at Kulungugu, he avoided being killed by a time-bomb planted in a bouquet of flowers that had been given to a small child to present to him.

“The aftermath of this assassination attempt against Nkrumah in August 1962 at Kulungugu, a town he was visiting on the Upper Volta border, rekindled opposition at his center of power. In the following months, a series of bombing attacks in Accra killed at least 20 persons and injured nearly 400 more.

“The bombers and planners of the attempted assassination at Kulungugu are unknown but were probably part of a small terrorist group with little following. Their objective appears to have been the creation of civil disturbances which would force Nkrumah to step down,” portions of a document titled, ‘The United States and the Overthrow of Kwame Nkrumah,’ from the Fort Hays State University, said.

Unable to immediately return to Ghana, Kwame Nkrumah wondered around a number of friendly countries in Africa.

In the video below, made available via Ghana Facts & History but sourced from Reuters, the former president is captured attending a reception in Conakry, Guinea, in 1970.

Watch the footage below:

1966 after FIRST HIS IN NKRUMAH OF overthrow Public time.footage WATCH 2022-07-19
Elvis Anokye
Share

Tags 1966 after FIRST HIS IN NKRUMAH OF overthrow Public time.footage WATCH

Previous AirtelTigo Customers on a winning bonanza in the “To Gu Me So” Reloaded Promo
Next VIDEO: One killed as tipper truck somersaults at Asitey mountains