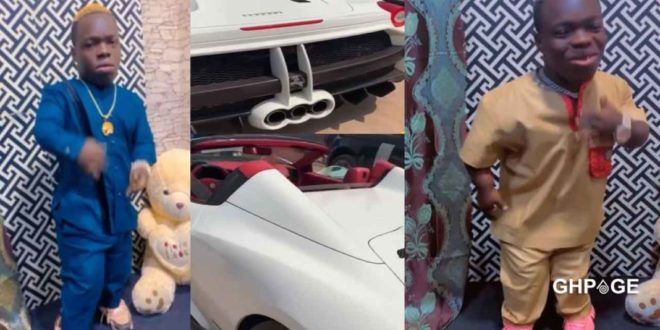 Shatta Bandle has ended the first quarter of the year 2022 on some good notes and rich living vibes as he has acquired the latest version of Ferrari. He claims he purchased the ride at a cost of 98.000 million US dollars.

The self-acclaimed billionaire born Firdaus Iddrisu, better known as Shatta Bandle has shared a video of himself riding his new ride in town on social media.

According to his voice commentary in the background of the video, the diminutive social media star stated that he does not show off his wealth to bring people down, rather he is always making moves to motivate people.

He continued that to be a big boy has a price adding that if anyone wants to chill with the big boys they should follow who knows levels which in this case is him.

The Young Rich Nigga in the video went further to compare himself to award-winning Nigerian singer, Davido whom he tags as his ‘Boy’ who purchased a Lamborghini Aventador.

He captioned the video; “Congratulations ???? to myself I buy this Ferrari 98.000 million US dollars ?“

Previous Traders, hawkers at KATH vow to resist eviction by KMA
Next Meet the justices who ruled on Assin North MP’s case