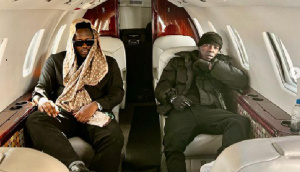 First or Business Class flights were ruled out of the plans this time around as Shatta Wale and his best friend, Medikal, flew in a private jet to the United States ahead of their Deeper than Blood (DTB) tour.

Captured in black apparel, the two took to social media to flaunt the interior of the aircraft and to prove that they were the only ones on board.

The two got off at the Heathrow airport where they were seen on another flight with some individuals including a popular Ghanaian DJ, Mic-smith.

They proceeded to a rousing welcome in Ohio where some luxurious cars including a white Mercedes Benz G-Wagon were waiting to convey them to their apartment.

Earlier, Medikal and Shatta filled the 40,000 capacity Accra Sports Stadium during the Freedom Concert which was held on Christmas day, December 25, 2021.

The two musicians will however be beginning their tour in the USA at Washington DC on Independence Day, March 6, 2022.

The bond between Medikal and Shatta Wale grew stronger when the two artistes were earlier arrested and remanded for allegedly flouting the law.

The two have since adopted the slogan ‘Deeper than Blood’ to cement their love and loyalty.

As smart as they seem, it appears these artistes have churned the slogan into a profitable business venture by not only releasing customised DTB apparel and releasing a DTB track, but also embarking on a DTB tour worldwide.