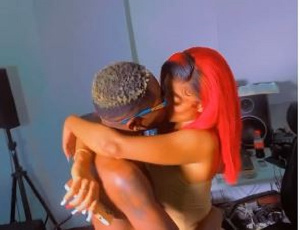 Dancehall musician Shatta Wale on Wednesday celebrated the birthday of his girlfriend, Elfreda in style by going all out with their public display of affection.

In a video published by the SM boss on his social media pages, he was captured passionately giving the love of his life a french kiss.

According to the Shatta Movement, fans of the artiste, their leader has truly found love as he has gone all out to prove to the world that Elfreda is the one for him.

Shatta, who has confessed to being madly in love with his girlfriend, could not keep his hands off her.

As part of her birthday today, Elfreda was spotted at her man’s private studio where he was busily smooching her like nobody’s business.

The video, which has gone viral, has garnered attention with fans describing him as a romantic man.

In a separate post, he wrote: “Happy b’day Freda. It came so quick. Tonite let’s go to Paris @elfy_officiall.”

Previous Commodities whose prices have skyrocketed in 2022
Next VIDEO: Ajagurajah’s congregation jams to Shatta Wale’s ‘Aye Half Caste’