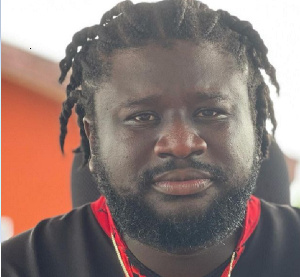 It was a moment of jamboree as members of the Ajagurajah Movement were spotted in a video making rounds on social media, jamming to secular songs.

Each of them while holding a calabash with an unknown content in their hands were dancing and winding their waist to Shatta Wale’s popular ‘Aye Half Cast’ song.

Unclear what exactly they were celebrating, members of the movement were clad in their usual red and black outfits while dancing the night away at the church’s premises.

Some social media users who were watching the congregation on Facebook live couldn’t help but lambast the movement for grooving to secular music.

Ajagurajah Movement founder, Bishop Kwabena Asiamah who was monitoring the live video from his page angrily stormed the stage, grabbed a microphone, and rained heavy insults on the critics.

“Those of you sitting on Facebook and passing silly comments about our page are very stupid. Those questioning why we are playing Shatta Wale’s songs at the party are very stupid. Do you think all those gospel songs you guys normally sing make you a Christian? Those passing such comments are all fools. If I don’t insult you today I won’t be alright. I am not a pretender so I allow my members to enjoy secular songs whenever they want to. You are all hypocrites. I am not a Christian so don’t be expecting certain kind of lifestyles from me”, he fumed.