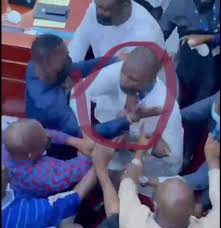 The Minister for Youth and Sports, Mustapha Ussif received a heavy punch when chaos broke on the floor of parliament on Monday, December 20, 2021.

The Members of Parliament were engaged in some fisticuffs in the chamber of the House during the voting on the controversial E-levy bill.

The disorder which was by then gathering momentum went haywire after the first deputy chair, Joseph Osei-Owusu [Joe Wise] vacated the chair for Second Deputy Speaker to take over.

The move by Joe Wise was an attempt to vote for the passage of the E-levy bill which the minority had countered.

The Minority had earlier contended that per parliament’s standing orders, the Speaker of Parliament does not have a casting vote, however, Joe Osei-Owusu indicated that he would still vote.

Just when Joe Wise was about to step down for the Second Deputy to take over, the Minority took the stage. In the process, the Minority clashed with the Majority with members of both sides exchanging blows.

Pictures of the punch have since gone viral on social media with many questioning the identity of the NDC MP who slapped the MP for the Yagaba-Kubori constituency.

‘Shameful, they are all thieves; are these our so-called leaders’ – Ghanaians blast MPs for fighting in Parliament