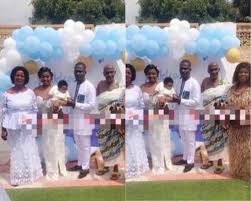 Minalyn and Erica have a kid each, with Zionfelix being the father

In a video making rounds on the internet, the two were captured at the event taking pictures infront of a white and blue ‘baby backdrop’.

Held at an undisclosed location, it was a ‘White and blue affair’ as the event décor was spotted with a touch of both colours.

Zionfelix was captured in a plain white Kaftan while his baby mama was seen rocking a white cold-shoulder gown.

One can recall that Erica welcomed a baby boy around the same time Zionfelix’s well-known girlfriend, Minalyn, also birthed a baby girl.

Following the events which earlier unfolded on social media, scores of individuals have condemned the blogger for impregnating two women out of wedlock and subjecting them to mockery.

But Zionfelix seems to be playing the baby daddy role to the best of his ability by providing for their needs.