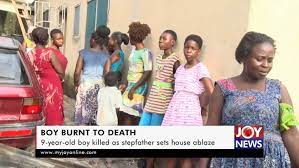 A nine-year-old boy was killed in an inferno at Medoma in the Ashanti Region on Monday dawn.

The blaze swept through four rooms in the apartment in which they live, affecting other families.

Step-father of the boy, known only as Agyemang, his wife and twin of the deceased, sustained various degrees of injury.

The step-father is said to have repeatedly allegedly assaulted his wife and two children.

“When I got home the night before the incident, the woman pleaded with me to speak to her husband who wasn’t happy with the wife since she accepted a phone from her brother. I called him and pleaded with him to desist from assaulting his wife”, the landlord, Daniel Opoku, narrated.

“He agreed and asked for forgiveness. I threatened to evacuate him as I have done on several occasions,” he added.

Mr Opoku said deep into the night, sounds of a loud cry for help woke him up.

The landlord subsequently found the burglar proof to the apartment was locked.

“I managed to open the door and saved the woman and the girl but I couldn’t get to the boy. The woman later told me the guy threw a wet blanket on the boy before starting the fire,” he alleged.

The nine-year-old boy, Prince Oti Atta, is said to have shown great potential in drawing and was widely described as a bubbly child.

Firefighters, after extinguishing the fire, recovered the charred body of the victim and deposited it at the morgue.

Other families in the house managed to escape unhurt.

But they lost all their property to the inferno with no hope of a place to pass the night.

The man is currently receiving treatment at the Komfo Anokye Teaching Hospital under police watch.