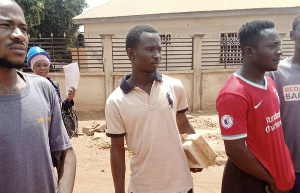 Residents of Kobilmahagu, a suburb of the Tamale Metropolis have dismissed claims that they attacked staff of the Volta River Authority’s Northern Electricity Distribution Company (NEDCo).

The residents claim that instead, the misunderstanding ensued between the staff and the occupants of a room where an illegal connection was detected.
“We were all at work, on a weekday, this area is mostly quiet. So, for them to claim it was we the residents who attacked them, then they lied. They have to be honest” a resident told GhanaWeb on Saturday.

“Some of us didn’t even know that such an incident happened until we heard about it in the news, yet, they’ve portrayed all of us as criminals,” he said.
Their denial comes after the VRA disconnected the area from the national grid on Wednesday, claiming that some youth of the community attacked and ‘butchered’ one of its casual staff.

The staff of VRA/NEDCo subsequently withdrew some of its services in the entire Tamale Metropolis, saying that they could no longer offer field services because their lives are not safe.

The Northern Regional Minister, Alhaji Shani Alhassan Saibu vowed to ensure that Kobilmahagu, a suburb of Tamale remains disconnected from the national grid until the community is ready to produce community members who assaulted staff of VRA NEDCO.

He insisted that until the community leaders fish out the perpetrators and bring them forward to be dealt with in accordance with the law, the Kobilmahagu community will “continue to be in darkness”.

However speaking to GhanaWeb, an eyewitness who gave her name only as Kande claimed the VRA staff were the ones who did not handle the situation well, accusing them of starting the fight.

“When they came to disconnect the power, the boys claimed Hudu, the young man who distributes bills in the area asked them to pay 600 cedis and asked them to connect. That’s what he’s been doing in this area.

So the boys said they will not allow the VRA people to disconnect them until Hudu, who was with the team gave them back their money. It was when they insisted that they will not allow them to cut their line that one of the VRA staff, who was quite huge, hit one of the boys and he started bleeding in the nose. The next moment, we saw one of the boys appearing with a cutlass and also slashed the VRA staff” she narrated to GhanaWeb.

She said that the unfortunate incident would not have happened if the VRA staff did not attack the boys.

“They saw them as small boys and decided to attack them first. If the VRA staff had not hit the boy’s nose, his friends wouldn’t have inflicted cutlass wounds on them” Kande added.

An aged woman whose tenants had a misunderstanding with the VRA, Hajia Samata corroborated Kande’s claims, saying that she was herself pushed down when she tried to plead with the VRA.

“I was fasting that day, so I was inside. Then I heard people shouting, when I came out, it was my tenants and the VRA people, I tried to plead with them and one huge man amongst their team pushed me down” she claimed.

She said she wasn’t aware that her tenants were stealing power, adding that she has always given them money as her contribution for them to buy electricity units.

Hajia Samata said she is now worried that she may not get power again.
“My son who built this house and connected it with electricity has died. If they say I’ll not get power even if the community is reconnected, then I don’t know what to do” she soberly noted.

Kobilmaha Naa, the Chief of the community pleaded with the VRA to reconnect the area onto the national grid as they help them locate the perpetrators of the crime.
“I’m pleading with them to forgive us and fix our power as we look for the boy. The heat is too much, we’re at the peak of the heat season, people cannot sleep outside and can’t also sleep inside because there’s no power” he said.

Tags BEING honest INCIDENT IS Kobilmahagu not RESIDENTS VRA/NEDCo WITH