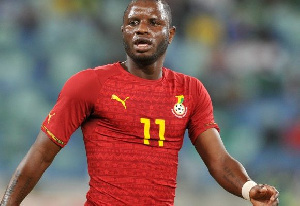 The Blue Samurais of Japan thumped the Black Stars of Ghana 4-1 on Friday, June 10, 2022, to progress to the finals of Kirin Cup.

Jordan Ayew got the consolation for Ghana in the heavy defeat while, Miki Yamane, Kaoru Mitoma, Takefusa Kubo, and Daizen Maeda were on the scoresheet for Japan.

Ghana will now battle Chile for bronze while Japan face Tunisia in the final on June 14, 2022.

The Black Stars had their worst night under the stewardship of head coach, Otto Addo.

Here are the player ratings after the big defeat

Yet another game for Ati-Zigi in the Black Stars shirt without a clean sheet. He was commanding in the air but whenever his reflexes were put to test he failed on most occasions, conceding four goals.

Although he cannot be faulted for all the goals, his positioning and awareness were poor throughout the game.

Andy Yiadom faced a huge test on the right in Kaoru Mitoma. The reading defender could not find an antidote to the silky winger who had an outstanding performance and scored on top of it.

Daniel Amartey could not get grip on the game. He seemed lost throughout the 90 minutes and committed error after error. He gave away possession on multiple occasions and failed to organise the backline.

Alidu made his debut for the Black Stars and it was certainly not a debut to remember. Although, he won a lot of duels, he looked shaky in possession and was caught out of position a couple of times, which affected the shape of the backline.

The left-back had his first Black Stars minutes. He looked decent and confident in possession but he did not add anything in attack and struggled while defending.

Takefusa Kubo took Korsah for a ride on the left side.

Primarily a midfielder, Edmund Addo was played as the sweeper in Otto Addo’s three centre-backs.

Addo was all over the place and did not know what his mandate was, playing at the heart of the two centre-backs.

Kudus Mohammed always wanted to do everything by himself and ended up losing possession in bad areas.

However, he made Ghana’s build-up work in some situations due to his ball-carrying and receiving passes in between the lines.

Wakaso left the centre-backs naked with his lack of positional awareness and indiscipline.

He could not shield the defense nor put Ghana on the front foot by winning the balls.

His long balls almost fell to the opponents everytime which made it difficult for the team to hold on to play.

Andre Dede Ayew suffered from the lack of supply from midfield. He was however busy and helped out defensively. His dedication and commitment to getting involved in the action were not missing.

Jordan Ayew was mostly isolated because Ghana were chasing the game and did not have much possession. However, the few times he had the ball he tried making things happing.

He scored Ghana’s only goal with an incredible strike.