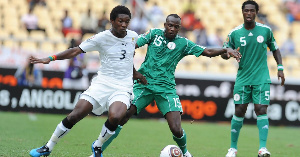 Ghanaian spiritualist, Seer Gyan has claimed that the Super Eagles of Nigeria are favorites to pick a positive result in their 2022 World Cup qualifiers against the Black Stars of Ghana.

The Black Stars of Ghana will host their West African neighbors at the Baba Yara Sports Stadium in Kumasi on Friday, March 25, 2022.

Despite the belief amongst many Ghanaian that the Baba Yara Stadium will prove as a fortress once again, Seer Gyan claims the tie will be decided in Kumasi and the Super Eagles are favorites to win the encounter.

Seer Gyan told Asempa FM in an interview that the scoreline for the Friday game will be 1-1 but the tie can easily turn in favor of the Nigerians if the right things are not done to change what has been written in the spiritual realm.

“I have seen the outcome of the game and I saw two goals which will be shared amongst the two teams in Kumasi and the second leg will end goalless so the tie will be decided in Kumasi.”

“All the two goals can go to Nigeria if we don’t follow the proper procedure to change what has been written in the spiritual realm but if you do it well, the two goals will go to Ghana and the one who will win the game on Friday will surely qualify to the World Cup,” Seer Gyan added.

Black Stars are chasing their 4th FIFA World Cup appearance after missing out on the 2018 edition in Russia but must do so at the expense of Nigeria, who are hoping to make it to the Mundial for the 7th time.