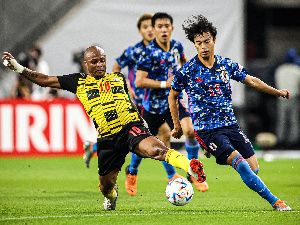 The Black Stars of Ghana suffered a 4-1 defeat at the hands of Japan in the Kirin tournament played on Friday, June 10, 2022.

Coach Otto Addo line up a depleted Black Stars team to face their opponents after several setbacks in the squad.

The Japanese found the opener in the 29th minute through Yamane after he connected defence splitting pass from a teammate.

Jordan Ayew levelled for Ghana in the 44th minute when he scored a superb goal to end his goal drought in the national team.

The Black Stars goal did not last long as the Japanese scored at the stroke of halftime to make it 2-1 through Mitoma.

The Black Stars failed to respond to the goal and the Japanese added another one in the 73rd minute after a defensive error from the Black Stars.

Japan’s Maeda made it 4-1 to break the Black Stars hope of a come back with an 84th-minute goal to cap off a great afternoon for the Japanese.

The defeat means that the Black Stars will now play Chile for a third-place finish on Tuesday, June 14, 2022.

Watch the match highlights below