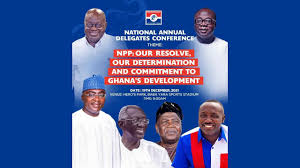 The National Delegates Conference of the governing New Patriotic Party (NPP) is ongoing at the Heroes Park in Kumasi.

The event is being held on the theme “NPP: Our Resolve, Our Determination And Commitment to Ghana’s Development”.

Over 8,000 delegates are expected to decide on over 91 proposals tabled to amend the party’s constitution.

According to John Boadu, General Secretary of the party, a total of about 120 proposals were submitted to leadership for consideration, out of which 91 were settled on following some repetitions in some of them.

“The proposals that were brought before us was close to 120 but you will realise that there were some that were double. The proposals may be the same from individuals so we put all together and put them in one bowl. Out of the 120 proposals, there were brought before us, we’ve been able to tease out about 91 motions. We have close to 91 motions,” he said in an interview with TV3 Saturday, December 18, 2021.

Key amongst the proposals which has sharply divided opinions is the proposal to elect the flagbearer of the party 2 clear years ahead of the general elections in 2024.

President Nana Addo Dankwa Akufo-Addo and his vice, Dr. Mahamudu Bawumia as well as other executives on all levels are expected to be at the event.