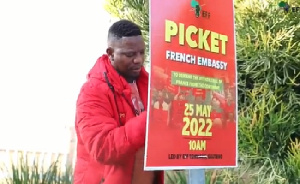 The French ambassador to South Africa, Aurelien Lechevallier, has stressed that his country has friendly relations with African countries.

He made the comments during a brief appearance on Wednesday, May 25, to receive a petition demanding that France leaves Africa.

The EFF picketed at the French Embassy on the day the African Union marked the AU Day.

Some placards the protesters bore had inscriptions like “West Africa is not a colony of the French” and “France must pay reparations for its colonial crimes”.

“You killed a lot of people in Africa. Why are you so scared today?” EFF leader Julius Malema said stressing that he was speaking to “French white supremacists.”

A tweet announcing the protest read: “The EFF will picket at the French Embassy on Africa Day, to demand the withdrawal of France from the continent.”

The EFF has periodically slammed France for its stranglehold over former colonies in West and Central Africa.

Anti-France sentiment has been growing across parts of West Africa with the most recent being in Mali.

Over in Central Africa, protesters were arrested in Chad and an opposition protest in Gabon was banned by government.