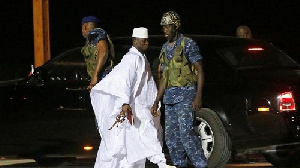 The Gambian government has said it will prosecute former President Yahya Jammeh for murder, rape, torture, and other alleged crimes committed during his more than 20-year rule.

The Ministry of Justice said on Wednesday that it accepted all but two of the 265 recommendations made by a commission that probed alleged crimes committed by the state under the despotic former leader from July 1994 to January 2017.

The commission’s report presented to President Adama Barrow and made public in December was based on years of witness testimonies.

Jammeh is currently living in exile in Equatorial Guinea, which has no extradition treaty with The Gambia.

The government said it would prosecute all 70 alleged perpetrators named in the Truth, Reconciliation and Reparations Commission’s twice-delayed report, including former Vice President Isatou Njie-Saidy and members of the so-called “Junglers” hit squad.

“For 22 years, Yahya Jammeh ruled The Gambia with an iron fist,” the government wrote in a white paper.

Al Jazeera’s Ahmed Idris, reporting from the capital, Banjul, said “victims, survivors, victims’ families, activists, diplomats everybody came here this morning with expectations that they will be disappointed at the end of the day”.

Many said they want to see these recommendations put into action by the government of The Gambia, Idris added.

Emmanuel Daniel Joof, head of Gambia’s national human rights commission, said: “We believe seriously that the government will own up, and these recommendations will be implemented.”

“This level of acceptance of recommendations by the government is extraordinary,” Fatty said.

“The fact that there is a strong emphasis for the prosecution of Jammeh and those who bear the greatest responsibility sends a strong message that government is serious about pursuing him and ensuring that he’s held accountable for his crimes,” he added.

The government said it was developing a “prosecution strategy” and would set up a special court located within The Gambia, with “the option of holding sittings in other countries.”

The truth commission had recommended prosecuting Jammeh and his accomplices in an internationalized tribunal in another West African country.

“Impunity is a kind of incentive that we are not prepared to serve perpetrators,” Justice Minister Dawda Jallow said in a speech Wednesday.

“Their resolve to commit these atrocities cannot be stronger than our collective will as a society to hold them to account.”

The former president has also been accused of administering phony HIV “treatment” programs and of the massacre of some 50 migrants in 2005.

The commission recommended prosecuting the former president and 69 other alleged perpetrators. The government had until Wednesday to respond.

Jammeh was forced into exile in early 2017 after his shock electoral defeat to Barrow and a six-week crisis that led to military intervention by other West African states.

Barrow, who was re-elected in December, last year formed a political alliance with Jammeh’s former party and nominated two known Jammeh supporters as a speaker and deputy speaker of parliament.

“Barrow and his government know that the world is watching, [so] they did not have much choice but to accept the TRRC recommendations,” said Nana-Jo Now, the founder of an NGO that campaigns against enforced disappearances and summary executions, whose own father disappeared in 2013.

“The question now is whether Barrow follows through on these recommendations, and swiftly.”