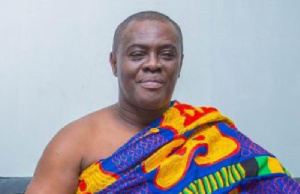 We don’t envy Ashantis, Bonos were around 130 years before them – Dormaahene talks history, law

Dormaahene, Oseadeyo Agyeman Badu II, has given a historical reason why the Bono people should not and cannot be said to be envious of the Ashantis.

The outspoken traditional leader pointed to the fact that the Dormaa stool had been established for a century and three decades before the Ashanti stool.

In the latest of his public reactions on issues to do with history of the Bono and Ashanti people, he stressed that he will not stay mute on controversial matters of history.

In a video where he is captured addressing a group of his subjects, the Dormaahene reiterated allegations against the Asantehene Otumfuo Osei Tutu II while emphasizing his resolve to ensure history is not distorted.

“There are some chiefs who let matters slide but that doesn’t apply to Agyemang Badu II. As for me, if you poke me, I will poke back but I don’t do so with any anger,” he said to cheers from his subjects.

In the 15-minutes long video, the Dormaahene takes a dig at the Asantehene relative to claims of his superiority as previously stated by the Otumfuo and as peddled by some of his subjects.

Agyeman Badu II stated that by law, the Asantehene was at the same level as all other Paramount chiefs in the country and that his sphere of influence ends within his domain.

While the Otumfuo had stated that Nana Agyemang Badu II swore allegiance to the Golden Stool, the Dormaahene tagged the claim as untrue.

“All that we as Bonos are demanding is respect. The truth is Oseadeyo Agyeman Badu I didn’t go to Kumasi to serve. So no chief should sit in his palace and make such statements. My grandfather did not go into Ashanti servitude.

“It was the indirect rule brought about by the whiteman through the Ashanti Confederacy. Even with that, we went at our own will, we were not forced by the whites.

“Initially, the people of Techiman didn’t want to go but they eventually joined and were the first people to exit followed by Dormaas. My grandfather joined in April 1850 and by July 1850 he had exited.

“So it was about the Confederacy which the white man sent everyone so we all come together. Whoever doubts should read the work of Mantey Klolley Commission on what caused the people of Bono to separate from Ashanti. It is in there, it was because of cheating,” the chief said.

According to the Dormaahene, the people of Dormaa left the Ashanti Confederation due to cheating on the part of Ashantis in terms of benefits and resource allocation.

Among other things, Oseadeyo Agyeman Badu II who is a High Court judge said that contrary to assertions by the people of Ashanti, the constitution of Ghana does not regard the Otumfuo to be above paramount chiefs.