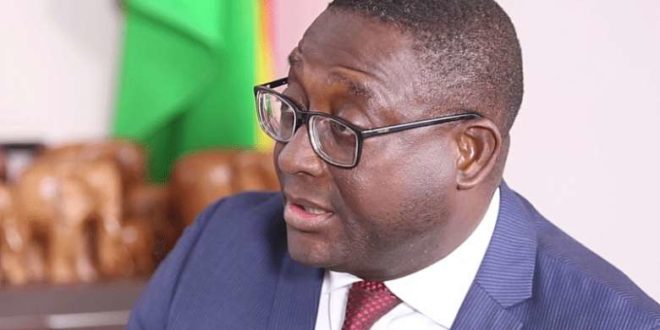 The ruling New Patriotic Party (NPP) has reacted to the Economic Intelligence Unit (EIU) report which predicted victory for Ghana’s main opposition party, the National Democratic Congress (NDC) in the presidential and parliamentary elections in 2024.

According to the NPP, it would not be news if the NDC wins the 2024 elections.

That, the NPP said was because it has been the tradition in the Fourth Republic for power to exchange hands between the two leading parties after every eight years.

In its response to the EIU’s five-years forecast of Ghana, the NPP said “The EIU hangs its prediction on the usual assumption. That presidential power has been rotating over eight-year periods in the 4th Republic is a fact so far.”

In its statement signed by its National Communications Director, Yaw Buaben Asamoa, the NPP said If NDC wins, it will not be news. But if the NPP wins, it would be a remarkable achievement that would demonstrate the coming of age of electoral politics in Ghana. In other words, an NPP victory in 2024, popularly dubbed “breaking the 8” would be a more unusual event than an NDC victory based on the history of elections in the 4th Republic.”

“However, EIU introduces a new and significant double-edged factor into the eight-year cycle. That is, the quality of leadership. EIU implies that former President Mahama’s record of leadership is so poor that if he becomes the Candidate, the NDC predicted win goes up in smoke. This is a huge boost to the NPP effort of “breaking the 8”, since we are confident that the NPP Candidate will have a better governance record based on the cumulative achievements of the NPP in the 4th Republic.”

In the statement obtained by African Entertainment, the ruling party welcomed what it termed as “constructive analysis of the governance of the country. This is because objective analysis extends the democratic tenet of free speech and provides perspectives capable of informing policy reform.”

It explained that “The Economic Intelligence Unit (EIU) has a record of reviewing Ghana’s governance systems, especially potential political outcomes. To buttress its prediction of the National Democratic Congress (NDC) winning the Presidential election and the Parliamentary elections by a slim margin in 2024, the EIU touts its record of successful predictions over the years.”

“The EIU cites slow governance progress as another reason for change in 2024. Unemployment, Infrastructure and Anti-Corruption. The cumulative record of the NPP in the 4th Republic is better on all these factors than the NDC. But more importantly, NDC has not demonstrated any policy capacity capable of turning out better and faster outcomes in the areas listed. Indeed, the tendency is for the NDC to set the country back in respect of these factors whenever the eight-year cycle kicks in. The NPP builds and the NDC destroys.”

“Political stability is also a product of the NPP’s quiet yet hard work on the security front. Notwithstanding increased threats of regional instability spilling over into Ghana, piracy in the Gulf of Guinea and sometimes very extremist talk from anarchic elements, the EIU predicts without hesitation that there will be political stability over the next five years. A plus for free, fair and violence free elections.”

“Finally, the economy. No country is immune to the twin scourges of Covid-19 and the Russia/Ukraine conflict. The NDC’s solution to the economic difficulties driven by these factors is to seek solace in the IMF. Abandon their leadership to the excuse of the IMF and feed off the crumbs of the harsh austerity measures that would roll back all the socially sensitive policies the NPP is sustaining to cushion the Ghanaian.”

“Needed to ride over this difficult phase is a strong bureaucratic commitment to efficiently and effectively implement the expenditure cuts and revenue measures outlined by the Government. Given an impetus by increased collections on the e-levy, reliance on external debt will gradually reduce, leading to increased growth by 2024.”

“Unfortunately, the EIU does not tell us how the NDC will come by its slim majority in Parliament. But given that Mahama is already the putative candidate, the EIU can comfortably say “we told you so” when the NPP breaks the eight with quality leadership and a strong policy performance that continues to deliver employment, increased infrastructure, and a higher profile against corruption.”

Previous ‘As if there’s no God, as if he is angry with me for something’ – Heward-Mills on son’s death
Next New Environmental Song for Kids to Inspire Greater Awareness for Recycling on Earth Day