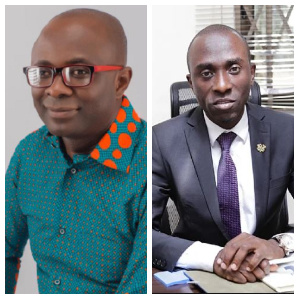 Ernest Owusu-Bempah, the Head of Communication of Ghana National Gas Company, says he will be on Net 2 TV and give a tit-for-tat jab against show host Kwasi Aboagye of Peace FM for denigrating him over views he, the former shared on celebrities involved in the #FitTheCountry campaign.

Speaking on his usual Saturday Entertainment Review on May 8, Kwasi Aboagye said: “Owusu-Bempah was asked to appear on the show to explain his Facebook post which described celebrities involved in the #FitTheCountry campaign as ‘social misfits’ whose behaviour can be ‘akin to drunken behaviour’ and they cannot teach the president how to govern.”

Aboagye first raised the issues on the Thursday edition of his show but when he called Owusu-Bempah to get his views on the issue at that time, Owusu-Bempah responded that he was in a meeting. Unfortunately, when he got back to the producers of Entertainment Review, the show had ended.

“From that time, Owusu-Bempah has been having a discussion with me particularly including my production team, he backed his discussion with us with messages threatening to fix me on Net 2 TV because I have allowed my panellists to express their views [on his post], which he finds […] offensive,” Kwasi Aboagye narrated.

Aboagye added, “The arrangement on the show was because we were not able to reach you on Thursday, we asked you to come today [Saturday] to tell us your side of the issue and he said he won’t speak and if I mention his name on-air, he will take me to court. Ernest Kofi Owusu-Bempah, Ghana Gas Communications Officer, I am mentioning your name – sue me in court.

He has even called my boss Father Dickson telling him that when Kwasi Aboagye mentions my name, I will sue him in court. Even if the management of Despite Media decides not to give me legal representation in court, I know lawyers who are willing to represent me in court.

Did I tell you to go and write that post on your Facebook timeline, take me to court? Because of people like Owusu-Bempah, I decided to study law.”

“You send me messages that I should watch it, I have an agenda, you’ll go and fix me on Net 2 TV; I should be shivering. Go to Net 2 TV and say all that you want to say about me but if I find it defamatory, I will also sue you.”

The social media campaign dubbed #FixTheCountry was initiated by some unhappy Ghanaians to vent their spleens over the failure of successive administrations to improve the lives of the citizenry.

Mostly made up of the youth, tens of thousands of posts have been made on social media highlighting some of these inadequacies.

“This is the right time for us to stand up and come together as one people to speak and let them [government] know that we are tired,” Joshua Boye-Doe, a social media user and initiator of the #FixTheCountry campaign said.

Coupled with corruption, erratic power and water supply, the advocates say the problems in Ghana have made their lives difficult.

#FixTheCountry has topped social media trends and dominated discussions for at least a week and has made many government appointees, including Owusu-Bempah uncomfortable.

Commenting on the matter, Ernest Kofi Owusu-Bempah Bonsu wrote on his Facebook timeline, “The temerity with which some so-called celebrities dabble in politics in this country amazes me at times. I just can’t get my head around it. I have been holding myself back from getting into the gutter with these self-styled comedians who dabble in social media politicking.

He continued: “Why do these ‘entertainers’ think anybody really gives a crap about what they think? Of course, this is the downside to social media; where below-average intelligence folks who can’t read and understand English want to teach the president how to govern. The politics of attrition and patronage isn’t gonna help these social misfits and their backers.”

“President Akufo-Addo’s resilience, dynamism, organizational acumen and political astuteness is changing the game, and he is fixing both a pandemic and a country. Covid-19 has continued to devastate our beloved country like many other nations the world over. It is a process and the president is delivering on his mandate in the midst of the challenges facing us as a country.”

He continued: “The noise being generated by these so-called celebrities is akin to drunken behaviour.

“What exactly have these celebrities fixed by themselves apart from their fake social media lifestyle and living on borrowed glory? Some of them can’t even fend for themselves let alone fix their boring life. They go about borrowing from people to support their fakery and some are in debt and can’t manage their lives and yet they are yelling at politicians?”