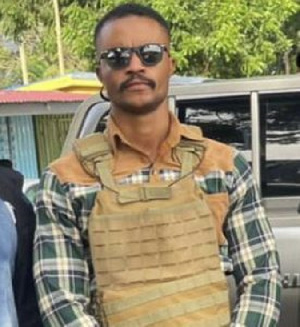 The family of the late police officer, Lance Corporal Stephen Kwaku Nyame who was killed in connection with the bullion van robberies, has said they are uninformed about the death of their beloved.

According to a brother, Richard Nyame, the Ghana Police Service administration has not formally written to inform the deceased family following the incident.

He revealed this on Anopa Bofoↄ morning show while expressing his shock and how the family is yet to come to terms with the news of his biological brother’s demise.

The late Constable Reindolph Ansah and Lance Corporal Stephen Kwaku Nyame were shot dead on the evening of Monday, March 7, 2022, in an exchange of gunshots during a raid at Borteyman near Ashaiman.

The two, according to the police, had earlier been arrested in connection with some multiple bullion van robberies in the Greater Accra Region.

Speaking on behalf of the family, Richard Nyame, said ever since the incident happened and nearing a week they’ve been informed about the “sad incident” but received the news in a hearsay.

“It was on Tuesday that we heard the occurrence of the unfortunate news, in fact we were shocked to hear that our brother who was on admission had been shot dead.

“So, since we were surprised, the family decided to wait for the police to call any family member and lodged an official complain but we didn’t hear anything from them for the whole of Wednesday, March 9, 2022”

“So, on Thursday, we proceeded to the Police and were later directed to the department of the Director-General of Police Welfare but he told us he is unaware of the development so he’s yet to be informed of the incident” he told host Kofi Adoma Nwanwani.

However, the deceased’s brother disclosed that his brother was on admission since December 2021 and was unfit, let alone returning to duties after he had sustained injuries through a motorcycle accident before later diagnosed with other illnesses such as Typhoid.

He added that, it was at that admission period when he was accused as a suspect involved in the multiple bullion van robberies in some parts of the Greater Accra Region.

Richard Nyame says the ‘Nyame Family” is thus demanding for the body of the deceased and also answers from the police administration because they could not fathom what he described as “bizarre death.”

Also, he served notice that they have given the Ghana Police Service by close of Today, Thursday March 14, 2022 to formally inform the family of the demise of their beloved with explanations else they will take the Police Service on

He declared that, late Corporal Stephen Nyame was neither a suspect nor a criminal as claimed by the populace but was just an accused by fellow officer known as ‘Pablo’ until his saddened death.

Previous Kwesi Nyantakyi to save Ghana against Nigeria petition?
Next Nkrankwanta mourns death of 3 persons in Asuboi accident