Home / SPORTS / Why Kwadwo Asamoah is trending on social media 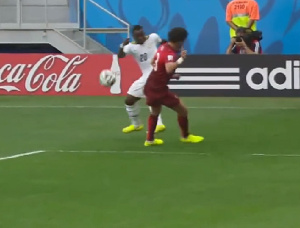 Why Kwadwo Asamoah is trending on social media

Modric assisted Rodrygo Goes with a fabulous pass using his outside foot for the Brazilian to tap in Madrid’s equaliser that took the tie into extra time.

The 13-time champions ended up winning the tie 5-4 on aggregate despite losing 3-2 in yesterday’s game.

The morning after the thrilling contest at Stadio Bernabeu, Kwadwo Asamoah has had his name in the trends on Ghana Twitter.

A video of the former Inter Milan man assisting Asamoah Gyan with a sumptuous cross using his outside foot has got Ghanaians comparing it with Modric’s.

Asamoah assisted Gyan for a consolation goal in Ghana’s final group game against Portugal in the 2014 World Cup.

Here are some social media reactions

Tags ASAMOAH IS KWADWO MEDIA on SOCIAL TRENDING WHY

Previous Evangeline Gbenartey Writes: Betrayal is one of the worst feelings ever
Next One dead, four others injured after bus crashed a cow at Gomoa Potsin