Home / GENERAL NEWS / Why should we pay to preach in town? – Street preachers in New Juaben protest fee regime 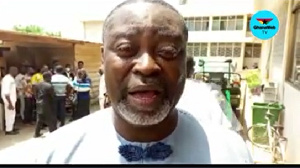 Why should we pay to preach in town? – Street preachers in New Juaben protest fee regime

Street preachers in Koforidua who call themselves Christ Preachers Association (CPA) have raised a red flag over the New Juaben Municipal Assembly’s intention to accredit them at a fee in the coming weeks.

The Assembly’s intended step is to regulate the activities of the street preachers and to serve as a form of identity for all the preachers in the municipality.

The Municipal Chief Executive (MCE), Isaac Appaw-Gyasi, at a stakeholders meeting stated that there would be a need to provide identity tags to all the street preachers at a fee to be determined as soon as possible so that their activities can easily be tracked and regulated.

“They themselves (the preachers) suggested it. We are going to register them.

“Look, they don’t pay anything to the Assembly. What I even dislike about them is the noise level, okay. We have given them time but they never go about the time given. They always go beyond 9 am into the working hours and that is what is causing a problem.

“You know this issue was even brought about by the media. It tells you that a lot of people are not happy about this noise pollution and we are going to act on that,” the MCE said.

However, members of the Christ Preachers Association have expressed dissatisfaction about the step and have indicated their plan to meet again with the MCE to come to a consensus on the Assembly’s decision.

According to one of them who is popularly called Evangelist Octopus, the Assembly’s decision would be unconstitutional.

“Why is it that as a pastor when I come out of the church to go out to the market to preach Christ you want us to pay tax. You want me to pay money. I don’t understand. Unless they explain to us by law,” he expressed.

The preacher furthered that even though it would not be a bad idea for the assembly to give them permission, it would be distasteful for the Assembly to attach a fee to their being registered.

“I have a problem with the fee that is attached to it. It will boil down to the point that we have to pay something before we are given a tag preach in town.

“And this money that they may be collecting from us will be renewable. It means that any government that comes may choose to increase the fee.”

Evangelist Octopus averred that as pastors, they already contribute to the development of the nation and that since the Church is a non-profit organisation, the Assembly “can’t tax the church since it is against the law of Ghana to tax the church.”

Another preacher, Apostle Frederick Adu held the view that it would be unheard-of for the assembly to collect a fee from them for only projecting Jesus Christ to the society.

“It beats my imagination about MCE’s stance that they are going collect a fee from us the preachers.

“All we do is to project Jesus Christ to the world so that all who have not accepted Him will do so.

“There are drunks, armed robbers, and thieves on the streets as well as some prostitutes who hear what we preach and end up refraining from those social vices. This goes a long way to help society.

“We can decide to stop the preaching but what will we make of the society when social vices increase?” He said.

When referred to the offerings they receive from passersby as some of the profits they make, Apostle Adu said “Oh how many offerings do we even get?”

“Let me tell you the truth. It’s not possible for the preacher to carry his speakers on his head from one place to the other. It is money he will use to convey such items. If the offering is against the law, then it should be stopped in the churches. How much do we even get? It’s just a small amount we get from volunteers,” he explained.

Meanwhile, when approached, the Chairman of the CPA, Felix Amankwaa intimated that it is actually not a wrong call for the preachers to pay some fee to help develop the Municipality.

He said that “I don’t think it is wrong for us to pay something to help the Assembly. But what I know is that preaching the gospel cannot be taxed.

“But the Assembly being our home and our big brother, the MCE approached us in a nice way and assured us of a good relationship. We have also decided to relate with him well for the betterment of our society.

“We have taken it in good faith but we will still sit with him to discuss further,” he said.

Tags IN Pay PREACH SHOULD to TOWN WE WHY