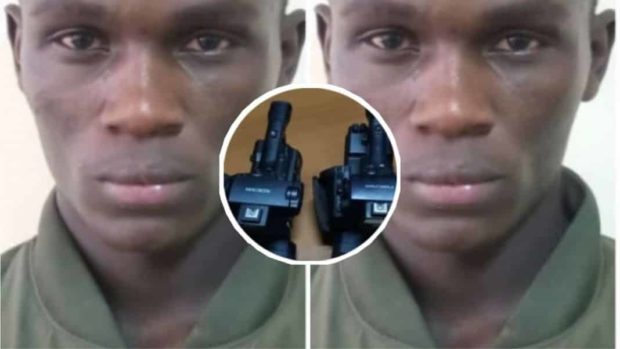 A church in Zimmerman, Nairobi, has forgiven a new convert who stole cameras worth KSh 1 million (N3.6m) during a prayer service.

David Wanyonyi Simiyu received salvation at Presbyterian Church of East Africa (PCEA) Zimmerman Parish but on Sunday, March 6, he proved he had not left behind his old ways after carting away the media equipment.

According to a statement from the Directorate of Criminal Investigations (DCI), Simiyu stole the two video cameras and their accessories as the faithful were deep in prayers.

It was not until the end of the service that the church realised that their cameras were missing and they immediately reported to the police who commenced their probe into the theft. By this time, Simiyu was already on his way to sell the equipment to unscrupulous dealers at Nairobi’s Imenti business hub.

“Forensic analysis and surveillance conducted via the DCI mobile laboratory in the heart of Nairobi’s Central Business District led detectives to the suspects who bought the equipment,” the statement read.

The new convert gets caught The three, Joshua Mulei, Douglas Karanja and Stephen Thuo, who trade in stolen electronic equipment, were unmasked technologically through forensics, in DCI’s new order of conducting business.

Meanwhile, the PCEA Zimmerman clergy have since forgiven Simiyu, in accordance with the scriptures and like the prodigal son have welcomed him back to the flock.

Previous Are the Black Stars players ghosts? – Songo quizzes GFA over delay of Black Stars squad release
Next Why should we pay to preach in town? – Street preachers in New Juaben protest fee regime