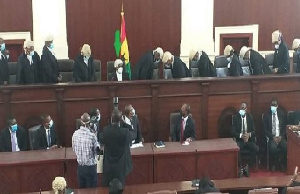 The Supreme Court of Ghana by a 5-2 majority decision on Wednesday, April 13, 2022, ordered Mr Gyekye Quayson to stop holding himself as a lawmaker.

According to the apex court, the decision is in the utmost interest of Ghanaians.

In the majority decision held by Justices Jones Dotse, Mariama Owusu, Gertrude Torkornoo, Professor Henrietta Mensa-Bonsu and Emmanuel Yonny Kulendi, it will be “failing in its exclusive mandate and duty to the Ghanaian people to uphold and protect the constitution” if James Gyakye Quayson is allowed to continue his duties as MP.

This, it says, will go a long way to endanger the sanctity of the Ghanaian constitution and democracy.

In the true and certified copy of the ruling issued by the court and available to GhanaWeb, the Supreme Court noted, “it is our further considered view that this court will be failing in its exclusive mandate and duty to the Ghanaian people to uphold and protect the constitution if it does not suspend, mitigate or abate [an] alleged constitutional illegality as in this case or an established, proven and adjudged constitutional illegality if the applicant were to succeed in the end in this suit.

“Such a failure, neglect, or omission will endanger the sanctity of the constitution, our democracy and for that matter, the safety of the Republic.”

“As the highest court of the land, it will be an indictment of the administration of justice if this court did not uphold the subsisting judgement pending a final decision on the constitutionality question raised before us.

“Though we are not exercising an appellate supervisory or some other jurisdiction in respect of the judgement of the High Court, we must not that through ‘Exhibit Man 2’ the 1st Respondent has been perpetually restrained from holding himself out as Member of Parliament for the Assin North constituency. Further, the unchallenged allegation by counsel for the applicant from the bar that the 1st Respondent’s appeal to the Court of Appeal (Cape Coast) has been struck out,” the Supreme Court said.

The two are of the view that the plaintiff, Michael Ankomah-Nimfah, should have sought enforcement of the High Court Judgment against James Gyakye Quayson and instituted contempt proceedings against the MP in the High Court rather than appearing before the Supreme Court.